Not to be confused with Chuvan language.

Chuvash (/tʃʊˈvɑːʃ/; Чӑвашла, Čăvašla; IPA: [tɕəʋaʂˈla])[3] is a Turkic language spoken in central Russia, primarily in the Chuvash Republic and adjacent areas. It is the only surviving member of the Oghur branch of Turkic languages. Because of this, Chuvash has diverged considerably from the other Turkic languages, which typically demonstrate mutual intelligibility among one another to varying degrees.

The writing system for the Chuvash language is based on the Cyrillic script, employing all of the letters used in the Russian alphabet and adding four letters of its own: Ӑ, Ӗ, Ҫ and Ӳ.

Chuvash is the native language of the Chuvash people and an official language of Chuvashia.[4][5] It is spoken by 1,640,000 persons in Russia and another 34,000 in other countries.[6] 86% of ethnic Chuvash and 8% of the people of other ethnicities living in Chuvashia claimed knowledge of Chuvash language during the 2002 census.[7] Despite that, and although Chuvash is taught at schools and sometimes used in the media, it is considered endangered,[8][9] because Russian dominates in most spheres of life, and few children learning the language are likely to become active users.

A fairly significant production and publication of literature in Chuvash still continues. According to UNESCO's Index Translationum, at least 202 books translated from Chuvash were published in other languages (mostly Russian) since ca. 1979.[10] However, as with most other languages of the former USSR, most of the translation activity took place before the dissolution of the USSR: out of the 202 translations, 170 books were published in the USSR,[11] and just 17, in the post-1991 Russia (mostly, in the 1990s).[12] A similar situation takes place with the translation of books from other languages (mostly Russian) into Chuvash (the total of 175 titles published since ca. 1979, but just 18 of them in post-1991 Russia).[13]

Chuvash is the most distinctive of the Turkic languages and cannot be understood by speakers of other Turkic tongues. Chuvash is classified, alongside the extinct language Bulgar, as the only remaining member of the Oghuric branch of the Turkic language family. Since the surviving literary records for the non-Chuvash members of Oghuric are scant, the exact position of Chuvash within the Oghuric family cannot be determined.

Formerly, scholars considered Chuvash not properly a Turkic language at all but, rather, a Turkicised Finno-Ugric (Uralic) language.[15]

The modern Chuvash alphabet was devised in 1873 by school inspector Ivan Yakovlevich Yakovlev.[16]

In 1938, the alphabet underwent significant modification which brought it to its current form.

The most ancient writing system, known as the Old Turkic alphabet, disappeared after the Volga Bulgars converted to Islam. Later, the Arabic script was adopted. After the Mongol invasion, writing degraded. After Peter the Great's reforms Chuvash elites disappeared, blacksmiths and some other crafts were prohibited for non-Russian nations, the Chuvash were educated in Russian, while writing in runes recurred with simple folks.[citation needed] 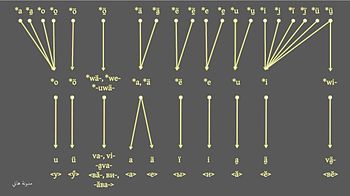 A possible scheme for the diachronic development of Chuvash vowels[citation needed] (note that not all the sounds with an asterisk are necessarily separate phonemes).

According to Krueger (1961), the Chuvash vowel system is as follows (the precise IPA symbols are chosen based on his description since he uses a different transcription).

András Róna-Tas (1997)[17] provides a somewhat different description, also with a partly idiosyncratic transcription. The following table is based on his version, with additional information from Petrov (2001). Again, the IPA symbols are not directly taken from the works so they could be inaccurate.

The vowels ӑ and ӗ are described as reduced, thereby differing in quantity from the rest. In unstressed positions, they often resemble a schwa or tend to be dropped altogether in fast speech. At times, especially when stressed, they may be somewhat rounded and sound similar to /o/ and /ø/.

Additionally, ɔ (о) occurs in loanwords from Russian where the syllable is unstressed in Russian.

The usual rule given in grammars of Chuvash is that the last full (non-reduced) vowel of the word is stressed; if there are no full vowels, the first vowel is stressed.[18] Reduced vowels that precede or follow a stressed full vowel are extremely short and non-prominent. One scholar, Dobrovolsky, however, hypothesises that there is in fact no stress in disyllabic words in which both vowels are reduced.[19]

There are two dialects of Chuvash:

The literary language is based on both the Lower and Upper dialects. Both Tatar and the neighbouring Uralic languages such as Mari have influenced the Chuvash language, as have Russian, Mongolian, Arabic and Persian, which have all added many words to the Chuvash lexicon.

As characteristic of all Turkic languages, Chuvash is an agglutinative language and as such, has an abundance of suffixes but no native prefixes or prepositions, apart from the partly reduplicative intensive prefix, such as in: шурӑ - white, шап-шурӑ - snow-white, хура - black, хуп-хура - jet black, такӑр - flat, так-такӑр - absolutely flat, тулли - full, тӑп-тулли - chock full (compare to Turkish beyaz - white, bem-beyaz snow-white, kara - black, kap-kara - jet black, düz - flat, dümdüz - absolutely flat, dolu - full, dopdolu - chock full). One word can have many suffixes, which can also be used to create new words like creating a verb from a noun or a noun from a verbal root. See Vocabulary below. It can also indicate the grammatical function of the word.

Chuvash nouns can take endings indicating the person of a possessor. They can take case-endings. There are six noun cases in the Chuvash declension system:

Taking кун (day) as an example:

Possession is expressed by means of constructions based on verbs meaning "to exist" and "not to exist" ("пур" and "ҫук"). For example, to say, "My cat had no shoes":

Chuvash verbs exhibit person and can be made negative or impotential; they can also be made potential. Finally, Chuvash verbs exhibit various distinctions of tense mood, and aspect: a verb can be progressive, necessitative, aorist, future, inferential, present, past, conditional, imperative or optative.

Chuvash has two classes of vowels: front and back (see the table above). Vowel harmony states that words may not contain both front and back vowels. Therefore, most grammatical suffixes come in front and back forms, e.g. Шупашкарта "in Cheboksary" but килте "at home".

Can not to stand next two vowels.

Compound words are considered separate words with respect to vowel harmony: vowels do not have to harmonize between members of the compound (so forms like сӗтел|пукан "furniture" are permissible). In addition, vowel harmony does not apply for loanwords and some invariant suffixes (such as -ӗ); there are also a few native Chuvash words that do not follow the rule (such as анне "mother"). In such words suffixes harmonize with the final vowel; thus Аннепе "with the mother".